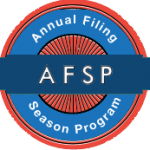 AFSP – Am I exempt or non-exempt?

What does it mean to be “exempt”

The term “exempt” related to the IRS Annual Filing Season Program (AFSP) does not mean exempt from the the program itself.  It just means you are exempt from one part of the program:  the Annual Federal Tax Refresher (AFTR) course, which is a 6-hour course with a timed final exam.

Who is exempt from the AFTR course?

The IRS recognizes it that some individuals have already studied for and passed state based tax preparer certification tests. Additionally some preparers have obtained credentials that indicate they have a solid basic knowledge of federal tax law.

The following tax preparers are not required to take the basic level course called the Annual Federal Tax Refresher (AFTR) to meet the voluntary CE standards.

The following are EXEMPT from the AFTR course

Anyone who passed the RTRP test administered by the IRS from November 2011 to January 2013. The IRS has a record of this.

Return preparers who are active registrants of:

NOTE:  Tax preparers registered in New York are not classified as Exempt from the AFTR, and will need the 18 hours required for non-exempt preparers to obtain the AFSP Record of Completion.  NY registered preparers are only required to pay a fee, and not subject to the CPE and/or testing requirements of OR, CA or MD.

Individuals who have obtained credentials from the Accreditation Council for Accountancy and Taxation:

Passed Part 1 of the SEE for Enrolled Agents

Tax practitioners who have passed the Special Enrollment Exam Part 1 within the past two years.

When is the Exempt determination made?

You must have an active valid license or certification as of December 31st of the prior year to be considered exempt for the current year.

The RTRP designation is an exception to this rule and anyone who passed the RTRP exam is classified as exempt for the duration of the Annual Filing Season Program.

What is the benefit of being classified as exempt?

If you are classified as exempt according to the classifications listed above, you are exempt from taking the Annual Federal Tax Refresher (AFTR) course. The AFTR course is a six hour course and in addition to completing the materials, you must pass a 100 question exam within a three hour time limit. You are allowed to take our exam a maximum of 4 times, however each exam contains a random mix of different questions.

In addition to saving three+ hours of your time, you are spared the expense of purchasing the extra CE hours.  Exempt preparers take a 3 hour tax law update course instead of the timed 6 hour Annual Federal Tax Refresher course.

Do I need to notify the IRS that I am exempt?

No. Credentialed tax preparers such as EA, CPA, Attorney, RTRP, ABA, ATP and preparers registered in CA, OR or MD  are not required to notify the IRS of their credential or provide evidence of it.

Which courses should I take?

If you want to take a package, choose between:

If you want to pick and choose your own courses, review the hours needed here:

Who are credentialed preparers?

A credentialed preparer is a:

Can credentialed preparers also be in the AFSP?

The AFSP program is not intended for credentialed preparers who already possess a much higher level of qualification. These preparers are still allowed to participate in the program, and they are required to meet the same CE requirements as preparers in the exempt category.

Although there is no cost associated with obtaining a record of completion for the AFSP, and many credentialed preparers would already have the necessary CE to meet the standards, there is very little benefit to obtaining the record of completion. The IRS database of tax preparers with qualifications already includes practitioners with recognized credentials and higher levels of qualification and practice rights, if they are registered with the IRS by having a PTIN.